Structures in the oral cavity: the teeth – Anatomy and physiology of the head, neck and chewing system

Human teeth consist of teeth and molars. We call them the teeth. In the mouth we have incisors and canines, behind which are the small and the large molars. In dentistry we use the following Latin names for this:

During the course of their life, every person first receives a set of milk teeth, which later makes way for permanent teeth. The first teeth break through about half a year after birth. The milk teeth are complete at the age of 2.5 years. The milk teeth have a total of 20 teeth. These are the following teeth:

The teeth are usually viewed by quadrant or jaw half. Because we have an upper and lower jaw, which we can each divide into two halves, we have four quadrants. A quarter of the total number of teeth is therefore contained in each quadrant. With the division into quadrants, the teeth are viewed from the center, where the incisors are. We call this center the median line. In the milk teeth we see per quadrant:

The milking teeth is indicated by numbers, small letters or Roman numerals.

When a child is around 6 years old, the first baby teeth start changing. The first remaining molars also break through. His jaws also grow as the child grows. This creates more room for permanent teeth. The complete permanent set consists of 32 teeth, namely:

From the center we see per quadrant:

A Denture. B Permanent teeth.

Location of the elements

A person gets 52 teeth in total during his life. These are the milking elements and the permanent elements combined. To avoid confusion, it must be well agreed what we call each tooth. Each tooth element also has different surfaces, so it must also be clear which tooth surface is meant. Agreements about naming are necessary because there are different people working in the mouth: dentist, dental hygienist, prevention assistant, orthodontist and MKA surgeon. They must all speak the same (professional) language. This professional language is not intended to prevent the patient from understanding what is being said, but to be able to communicate with each other in short and clear terms. For example, if a dentist says “extraction 38”, that will initially be a secret language for a patient. However, the message is clear to all dental staff:

A tooth can be indicated in different ways with a kind of “code”. The indication with numbers is the most used. But we will also discuss less used systems.

Each tooth can be indicated with two digits. We call this the twodigit system. These two digits must be pronounced separately. This means that 23 is pronounced “two-three” and not “twenty-three.” What do those two numbers mean?

The first digit is therefore:

Quadrant indication in the permanent teeth and in the milk teeth. 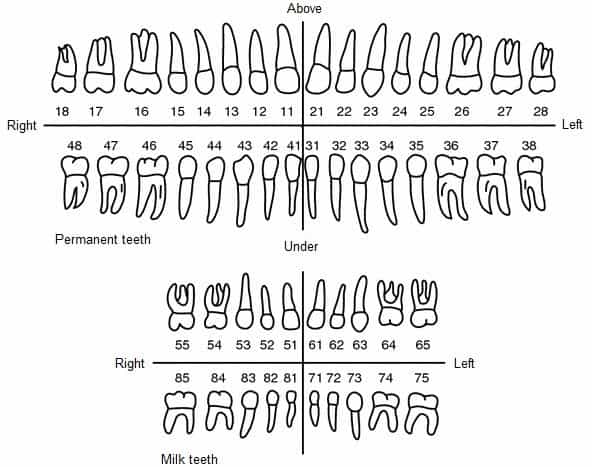 Location of the teeth by means of two digits.

MKA surgeons (oral diseases, jaw and facial surgeons) still sometimes indicate the teeth with their Latin name. First an abbreviation is given for the Latin name of the tooth. Then 2 more letters follow to indicate the quadrant. For example M2sd, where

The following agreements apply to this method:

Location of the teeth with letters and a number.

In the upper image all elements of the permanent and the milk teeth can be seen. The Latin words with their meanings and abbreviations are shown in the table below. M2sd from our example is therefore the second permanent molar at the top right. (We could have called this the 17.)

The indication with brackets around the elements is used less often. For example, on orthodontic tires, this indicates the element number. The way of indicating an element is indicated in the figure below. Here too, a kind of cross is used to indicate the different quadrants. That part of the cross is placed around the element that corresponds to the relevant quadrant. The numbers 1 to 8 are used for the permanent teeth (at the top of the figure). Roman numerals are used for milk teeth, namely I, II, III, IV and V (See illustrations below). 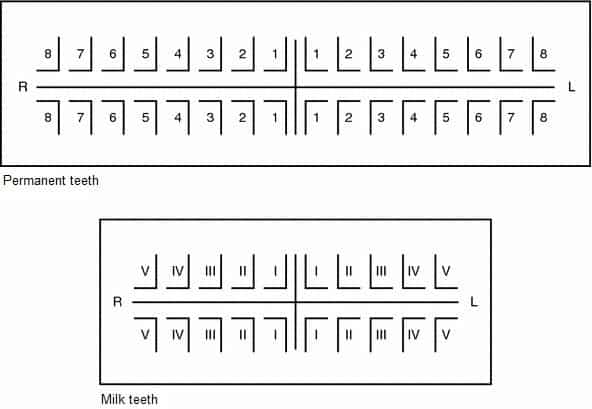 System designation using brackets around the element numbers.
Indication of the element on an orthodontic belt. It is a band for the first molar in the upper left and has size 28.

So there are different methods to identify the same element. A few examples:

Area indication of the teeth

Now that you know how to name the different teeth elements, an explanation of the surface designation of the elements is given below. You can compare a dental element a bit with a die lying on a table. You can see five faces (the bottom is invisible). We call the different planes again with their Latin name: 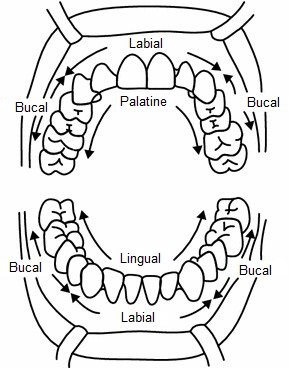 An upper incision (a) and an upper molar (b). The five different planes with their Latin name.

Construction of the elements

To describe the construction of an element, we divide the tooth or choose into three parts:

On the basis of the characteristics of these three different parts you can distinguish the different teeth and molars from each other (Figure below). That way you can recognize what kind of element it is: incisive, cuspidate, premolar or molar. You can also determine the position of the element in the jaw using different morphological characteristics: below or above, left or right. Morphology is the knowledge of form and anatomy of the teeth. 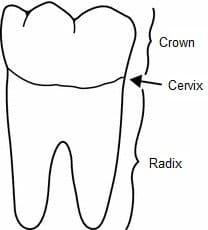 The three parts in which we divide an element.

The shape of a crown immediately shows whether the element is an incisive, cuspidate, premolar or molar:

Below we briefly discuss the morphological details of the crown of the various teeth.

Morphological details of the elements

You can distinguish the following details by the crown of a dental element (see image below):

1) Edge list or marginal crista: a ledge along the border of a plane;

2) Crista obliqua: a ledge that runs diagonally across the occlusal plane of upper molars.

1) Central fossa: The hollow in the middle of the occlusal plane of a molar;

3) Linguistic fossa: A hollow on the linguistic plane of an incisive or cuspidate.

Elements of the upper jaw

In the upper jaw you have the following teeth:

Elements of the lower jaw

In the lower jaw you have the following teeth:

We call the transition from the crown to the root the dental neck, cervix or enamel-cement border. At the glaze-cement boundary, the glaze of the crown ends and the root cement begins. The tooth neck is a clearly visible line on an element that runs all the way around the element. You can also feel the glaze-cement border. The line follows the shape of the gums. On the mesial side the line runs higher (in the direction of the crown) than on the distal side. The cervix can therefore help determine the mesial and distal sides of an element (see figure below).

The number and shape of the roots also give you information about the teeth. Incisives and cuspidates have one root. Premolars also usually have one root, except for the first premolars in the upper jaw. These have two roots. Molars in the upper jaw have three roots, while molars in the lower jaw have two roots. Root points often exhibit a curve to distal. Knowledge of root forms, the number of roots and root canals is important in different areas of dentistry: endodontics, periodontics and in extractions (See table below).

The enamel is the hardest material in the human body. Glaze covers the crown of an element. It is a highly calcified substance that consists of 92% of inorganic lime salts (apatite), H2O (water), and organic material (cement). Glaze protects the element against harmful external influences and is resistant to chewing forces (see image below). Calcium salts do dissolve in acids. Bacteria in dental plaque excrete acids and can cause tooth decay. But acids in our diet can also damage the enamel. For example the carbonic acid in soft drinks. We call this dental erosion. 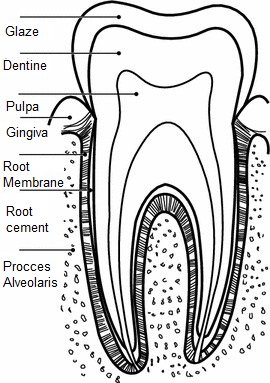 Cross section of a dental element.

The glaze is made up of crystals. The crystals run from the dental bone to the tooth surface. The cells that form the glaze are called ameloblasts. Ameloblasts form the enamel, but die before an element’s breakthrough. After the breakthrough, glaze can no longer be added. Enamel cannot “cure” if there is wear or tooth decay.

The glaze layer of the crown is not the same everywhere. The layer on the nodules is 2-3 mm thick. It runs thin to the glaze-cement border. The glaze layer is also very thin on the bottom of the fissures.

The dentine or dentin is softer than the enamel, but still quite hard. It is somewhat yellowish in color. The dentin cannot be seen with a healthy tooth. You do, however, sometimes see the yellow color at the front teeth twilight through the enamel.

A dental element consists for the most part of dentin. The dentin forms, as it were, the skeleton of an element. Many strong fibers are present in dentin. 70% of the dentin consists of inorganic lime salts, cellular tissue, fibers and organic material.

The dental nerve or pulp is located in the middle of the dentine. The pulp is a network of nerve fibers, blood vessels, lymph vessels and connective tissue in the pulp chamber and pulp channel. The pulp enters the element through an opening at the root point. This opening is called the apical foramen. The pulp feeds the tooth tissue (via the odontoblasts) and also takes care of the defense.

The periodontium is a complex of supporting tissues of the teeth. It is also called the “hanging device” of the elements. The periodontium consists of the following structures:

The periodontium is discussed in detail later.

The alveolar or dental process is the part of the jaw in which the teeth are attached.

The gingiva or gums form a collar around the dental element. It is stuck on the transition from crown to root and protects this transition.

DentistryBook: Get expert solutions to your dental problems

5 Ways to Get the Most Out of Your New Dentures

What are the Causes of Gaps in Teeth?

8 Foods That help to Whiten your Teeth

How to Fix My Gap in Front Teeth?

A Helpful Guide to Brushing Your Teeth the Right Way