Dentistry Book
Guarantees hours of reading pleasure for young and old. Your online place where you can find the best tips about recognition, prevention, symptoms, causes of dental diseases and health!

Gap Between Your Front Teeth – Problems And Their Solutions

What important is for a treatment is how the gap between the teeth originated. The two most common options are:

The gap has always been present

If the gap has always been present, the three most common solutions to the problem are:

Closing the gap, or central diastema as it is officially called, with the aid of a bracket is also possible in certain cases.

Close the gap with composite

Has the gap always been present and your gums healthy?

For information about healthy gums, read the Introduction, under “What is a beautiful teeth?”

There is a gap between the two front teeth.

In this situation it is fairly easy to close the gap with building up of composite (white filling). In general this will be the first treatment proposal. The method is relatively inexpensive and easy to do in one session. You can then get used to your new appearance. Closing a gap between your front teeth has a lot of effect on your smile, some people want the gap back after treatment! This is easy to achieve with this method.

If the gap is closed with composite, this means that a bit is put on both teeth that adjoin the gap. The purpose of this is to maintain symmetry. Putting a piece on one tooth gives a strange asymmetrical teeth.

Your teeth naturally become wider by turning on the extra pieces. It must be determined in advance whether your front teeth will not fall out of tune compared to the rest of your teeth.

The teeth are cleaned and roughened up locally 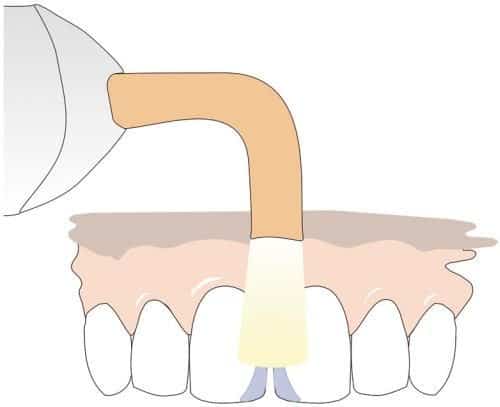 An adhesive layer is applied which is cured with light. Both front teeth are made wider, so that the gap is closed and the view remains symmetrical.
Prev 1 of 3 Next

Close the gap with porcelain facings

Instead of using plastic, the teeth on either side of the gap can also be made wider with the aid of porcelain veneers. The facings not only fill the gap space, as with the composite treatment, but cover the entire front tooth like a shield.

Placing porcelain facings is more expensive than making composite structures and the treatment takes longer, but the end result is beautiful and the restorations will not discolor.

Facings fall like a shield over the entire tooth.

Porcelain facings are made by a specialized porcelain technician, your dentist does not do this himself. It is a so-called indirect restoration. So you will always have to come to the practice at least twice, once for the preparations and once for the placement.

The same teeth after applying four porcelain facings.
Prev 1 of 2 Next

The two front teeth to have a crown

Both front teeth with a crown is an extensive treatment. For this, quite a lot of one’s own teeth must be sharpened. This treatment is eligible if not only is there a gap, but the teeth are also very filled or discolored. A crown is stronger than a porcelain facing, which can also be a reason to make crowns. For example when there is grinding or nail biting. Just like porcelain veneers, crowns are indirect workpieces, the dentist does not make them themselves. You will therefore have to come to the practice at least twice, once for all preparations and once for placing the crowns.

Close the gap with orthodontics

Gaps between the front teeth.

Sometimes orthodontic treatment is a possibility, especially if there is also space between the lower and upper teeth, a so-called overbite. Because all teeth and molars of your teeth are in relationship with each other, it will always have to be seen how this relationship will change as a result of the orthodontic treatment. Even if you are only interested in two teeth, a new and especially stable situation between all the teeth must be the end result in your mouth. Your dentist or orthodontist can see for you whether orthodontics is a real treatment option for you.

The cleft is caused by periodontitis

While wearing the braces

After orthodontic treatment.
Prev 1 of 2 Next

If the gap between your teeth is caused by periodontitis, then it is a different story, this is an unhealthy situation. Your teeth probably stood up earlier and changed location later in life. They are also a little loose and occasionally your gums will bleed when brushing. Teeth that have been weakened by periodontitis always require treatment of the inflammation before the cosmetic treatment can be continued.

The development of periodontitis

If plaque remains on and around the teeth and molars for a long time, the gums will become inflamed. Paste is the stubborn, sticky layer that is continuously formed on your teeth. If you do not brush away the plaque every time, so many bacteria and waste products are present within a short time that your gums become irritated and inflamed. Gingivitis is called this inflammation, recognizable by the red color of your gums and bleeding when brushing.

Gingivitis can be recognized by red and swollen gums.

Something to remember: if your gums bleed when you brush, there is always something wrong. It used to be said that bleeding gums were the result of good and firm brushing, this is not the case. It is precisely the result of brushing too little or in the wrong way. Gingivitis does not hurt. Actually, that’s a shame, because it doesn’t alert you. Unfortunately, many people think that it cannot be serious. If you let the gingivitis or bleeding gums exist for a long time without doing anything about it, the inflammation can spread to your jaw bone. This is called periodontitis. Periodontitis is the cause of detached teeth.

The healthy situation: the gums are tight around the tooth.

The gums are swollen and red due to gingivitis.

There is tartar under the gums and the jaw bone is affected by periodontitis.
Prev 1 of 3 Next

Are your teeth loose and the gums around it are red? Then there is a good chance that you have periodontitis. Cosmetic treatments are still possible, but your dentist will first have to treat the inflammation.

A detailed description of the treatment of periodontitis falls outside the scope of the book. However, since the treatment is necessary as pre-treatment before restoration can be started, the course is briefly described below.

During your first session, your own dentist, or a dentist-periodontist, will start by measuring the damage caused to your bone and gums by the inflammation. A dentist periodontist is a dentist who specializes in gum disease. The measurement is done with a small measuring rod that is slid along each tooth and molar into the space under the gums.

This way it can be measured how far the bone has fallen. The dentist also looks at where the gums bleed, where plaque is present and where extra dirt is left in your teeth. After this measurement and recording the initial position, extensive dental cleaning and instructions for cleaning at home follow. The professional cleaning will be repeated a number of times. Once the condition has stabilized, aesthetic treatment can be started. In principle, all cosmetic treatments are possible. However, extra consideration must be given to the fact that the teeth are looser than usual and probably have a shorter lifespan. A costly restoration such as a facing or crown will therefore only be considered if the treatment of the periodontitis is successful and the condition is stable. Furthermore, it is sometimes advisable to fix the loose tooth (s) to one or more neighboring elements after treatment by means of splints. Splints offer the teeth a hold for longer periods of time, called semi-permanent retention.

A pocket sond measures how deep the tooth gap is.

Close the gap with orthodontics

If the gap between your teeth is caused by periodontitis at a later age, then orthodontics, after the periodontic treatment, is the appropriate method to put the teeth back in their original position. So a brace. Fixed or removable, that you usually do not have to choose yourself, but depends on the position of your teeth. After the orthodontic treatment, a wire splint will most likely be stuck behind your teeth to hold the teeth in place. This wire splint is permanent (forever), or at least for a period of years.

Permanent retention by means of a wire splint.

Due to the presence of the wire splint you can no longer floss between your teeth and you will have to use stokers or brushes. Especially for your teeth, which is apparently sensitive to periodontitis, cleaning is of the utmost importance.

Subscribe to our newsletter
Sign up here to get the latest posts, updates and special offers delivered directly to your inbox.
You can unsubscribe at any time

I'm Furkan Kizilbayir, the guy behind Dentistry Book. I'm a part-time blogger. I mainly blog about dentistry & health. I study dental assistant and I am in my last year and I also like to design websites in my free time. Over the last few years, Dentistry Book has grown into a pillar of the dental industry with thousands of site visitors each day.

Gap In Teeth – Problems And Their Solutions

With this trick you get whiter teeth within five minutes

Front Tooth Is Crooked – Problems And Their Solutions

How To Know If Your Child Needs Dental Braces

Inflamed Gums: Causes and Tips to Prevent It

Gap In Teeth – Problems And Their Solutions

This website uses cookies to improve your experience. We'll assume you're ok with this, but you can opt-out if you wish. Accept Read More